How Much Dancers Earn 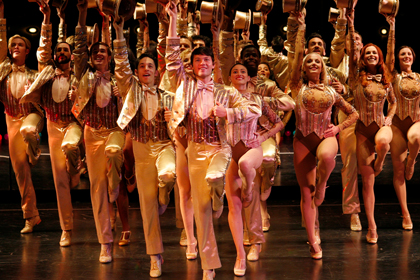 When a dancer decides to go pro, lots of questions come up. Can I really earn a living and pay my bills as a professional dancer? What should I anticipate in terms of income? Are there differences between ‘union’ and ‘non-union’ benefits?

The numbers here have been collected from various industry sources, some official, some not. For absolute accuracy, we suggest confirming the figures by contacting the appropriate union through the websites listed.

The following maps illustrate general guidelines for dance employment in the United States. While many states are highlighted, the highest concentration of Dance jobs can be found in New York City, Los Angeles, Florida, Chicago and Nevada. New York City leads the way in dance opportunities. 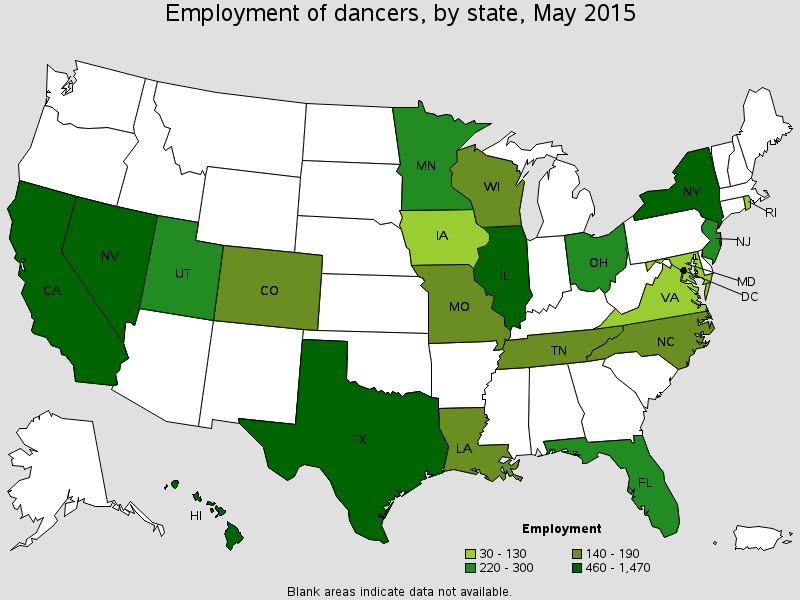 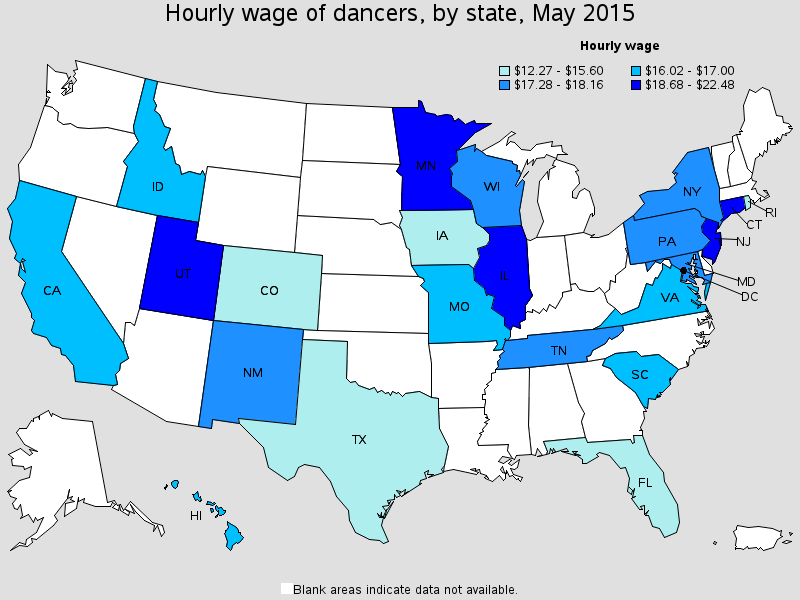 Actors' Equity Association (“Equity"), founded in 1913, is the U.S. labor union that represents more than 50,000 Actors and Stage Managers. Equity seeks to foster the art of live theatre as an essential component of society and advances the careers of its members by negotiating wages, working conditions and providing a wide range of benefits, including health and pension plans. Actors' Equity is a member of the AFL-CIO and is affiliated with FIA, an international organization of performing arts unions.

NOTE: If you are a member of a union, you are restricted from working in non-union projects. Always refer to the rules and regulations set by your union if you have any questions about a particular job so you don't put your union status in jeopardy.

Union: Actors Equity Association. (www.actorsequity.org) has offices in New York City and Los Angeles. Same minimum salaries as Broadway Musicals. In addition to the extras such as understudies, covers, featured bits, and hazard pay, per diems of $100 per day are paid, raising the weekly income by $700.

SAG-AFTRA announced in 2012 that it had reached the first-ever industrywide agreement covering dancers in music videos. The deal encompasses Sony Music, UMG, Warner, EMI, Disney and their subsidiary labels. Dancing for award shows is also determined by SAG-AFTRA. Effective June 1, 2014, the 10-hour day rate is $520 and a 12-hour day rate is $626. There is also pay for rehearsal days that require a minimum of 8 hours of pay ranging from $40-$42/hour. There is additional pay for certain risks or stunt work as determined by the union. According to SAG-AFTRA, a music video is defined as an audiovisual product that contains as its underlying audio track, a sound recording produced under the AFTRA Sound Recordings Code and a visual element of the type of genre traditionally produced for exhibition on cable television or made available for digital distribution via Internet streaming and/or download.

Dancers Alliance Rates. (not a union). Dancers Alliance's mission is to be the unified voice of the national dance community and improve the careers of professional dancers and choreographers through education and solidarity. They negotiate equitable rates and working conditions for non-union workers and represent the dance community on union boards and committees. 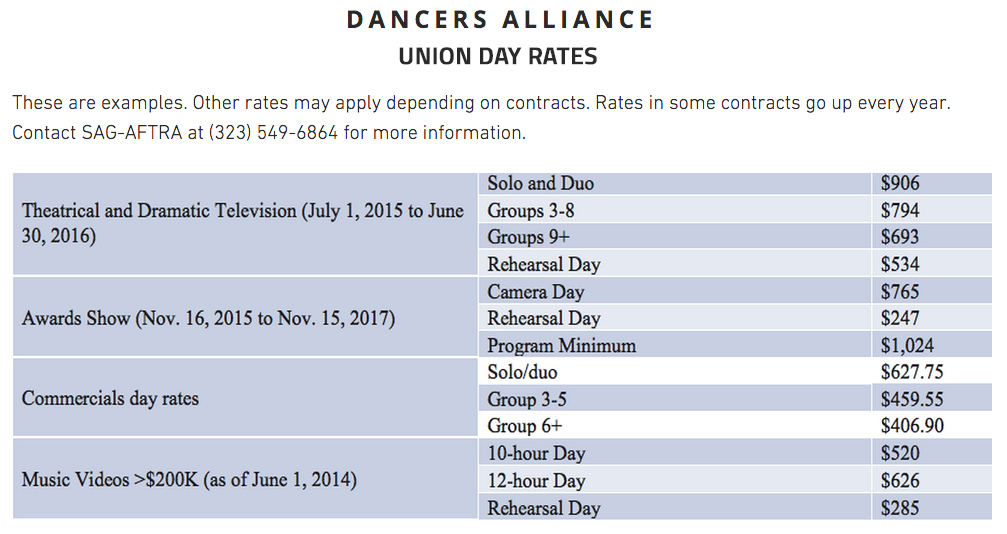 Please note: There are no organizations representing dancers in Las Vegas. Traditionally, each venue sets its own pay scales. Here's a few examples of weekly salaries that we've received from working dancers.

Performance schedules differ from venue to venue. 6-12 shows are presented each week. "Storm" is the first Vegas production to establish hazard pay. While low, the $15-30 payment per week is a beginning in the right direction.

Pay rates for cruise ships vary from company to company. There are pay advantages for speciality dancers, i.e. adagio, ballroom, acrobat/dancer, singer/dancer are paid more. You also should receive medical and dental benefits. If you factor in room and board, plus the fact that you're working steadily, you will be doing quite well. Most cruise ships have a minimum age requirement of 18 years old to audition. A handful require age 21 and older.

Disney theme parks pay rates begin higher than the pay rates on cruise ships. Beginners make just over $500 a week. More can be made, again depending on extra skills and also the role you're playing.

Union: American Guild Of Musical Artists. (www.musicalartists.org) Range of pay for ensemble artists is $500-600 per week. Non-union salaries vary from company to company. Possible range: $350-500 per week. Many companies are unable to offer salaries due to survival economics. We suggest (1) visiting our comprehensive Dance Company Directory found in the footer of the A4D homepage for individual company employment policies and (2) contacting AGMA (http://www.musicalartists.org) for more details.

The American Guild of Musical Artists is the American labor union that represents about 8,000 current and retired opera singers, ballet and other dancers, opera directors, backstage production personnel at opera and dance companies, and figure skaters.

SAG-AFTRA and Actors Equity offer the strongest medical and pension benefits. Contact them for details. Both unions are listed in Los Angeles and New York phone directories. SAG-AFTRA website is listed below.

ANOTHER REMINDER: For absolute accuracy, we suggest confirming the figures by contacting the appropriate union through the websites listed. 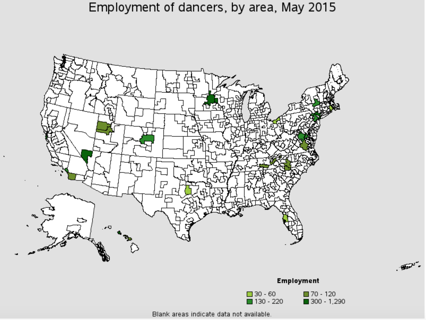 AREAS WITH THE HIGHEST EMPLOYMENT LEVELS 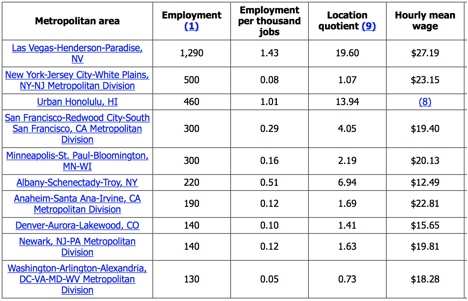 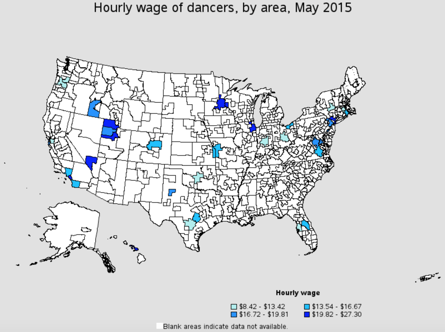 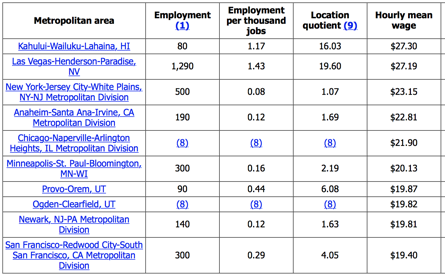