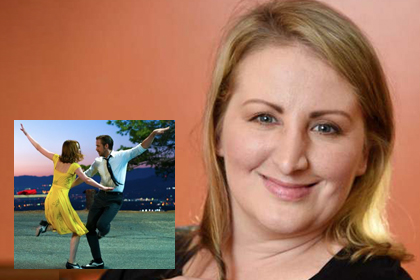 The next video features Mandy sharing her creative process for the incredible opening dance scene for La La Land.

WILL THE ‘OSCARS’ EVER BE DANCE–FRIENDLY?

Yes. When movie makers start recognizing how effectively choreographers (like MANDY MOORE) can elevate the characters they put on the silver screen… the Oscars might start paying attention to movement and the artists who create it.

Many of us have just witnessed the forces behind LA LA LAND going down that very path. They scored. Putting actors Ryan Gosling and Emma Stone in a room with Mandy Moore was a total win. Together, a blend of moves was created that ‘humanized’ the characters as well as the longings they had for each other. The professional polish of a Gene Kelly or Leslie Caron was missing, replaced by a simplicity that anyone could relate to. We found ourselves embracing the moves in a fresh, new, and emotional way. Oscar worthiness all around the room.

RECOGNITION FOR MANDY MOORE? WHERE DOES THE BALLGAME GO FROM HERE?

Recognition for ‘choreography’ is generated by producers, writers, agents, unions, choreographers, and of course… the courageous artists performing the moves. We’re all players. We are as obliged to improve the system as much as we choose to work in it.

Here’s a fix worth considering:

Brian Gendece, a west coast producer and dance advocate, said... ’When LA LA LAND first came out I looked for Mandy’s credit on IMDb and she was almost impossible to find…listed under ‘Other Crew’ below food stylist, stand-ins, and her own assistants. This is insane! Every choreographer on a film like this should be hired as an ‘above the line player’ (part of the principal creative team)…not ‘below the line.’ I’m hoping SAG will focus on that. If that gets in place, the Academy would be open to Oscars for choreographers as a first step.’
We have choices here. We can petition for Mandy’s right to be acknowledged as a member of LA LA LAND’S ‘Primary Creative Team.’ We can remind our unions and agents that we support any effort made towards eligibility and recognition of choreographers. We can join Liz Imperio’s crusade to reverse the lack of understanding about choreography. We can stand proud of the Oscar recognition achieved by choreographers Rob Marshall, Michael Kidd, Jerome Robbins, Gene Kelly, and Onna White. And we can move forward feeling confident that STORY-TELLING & SELF-PRODUCING SKILLS are surfacing as a new generation of dancers taps into technology.
The young ones are not kidding. Emotional wattage is getting boosted and articulated simply through the use of personal devices. Personally, I take comfort in the results coming in from A4Ders like Brandon Hudson, Carrie Lee, NaTonia Monet, and Corey O’Brien. It’s only a matter of time until the right dancer shows up with the right web series or film that will turn the Academy upside down wondering why it held back so long on recognizing the value of choreography!
The voices of the dance community are speaking out now as we lead up to the Oscars. We will post any updates to this page as they happen.
ANY OTHER GOOD IDEAS OUT THERE? We'd love to hear from you.