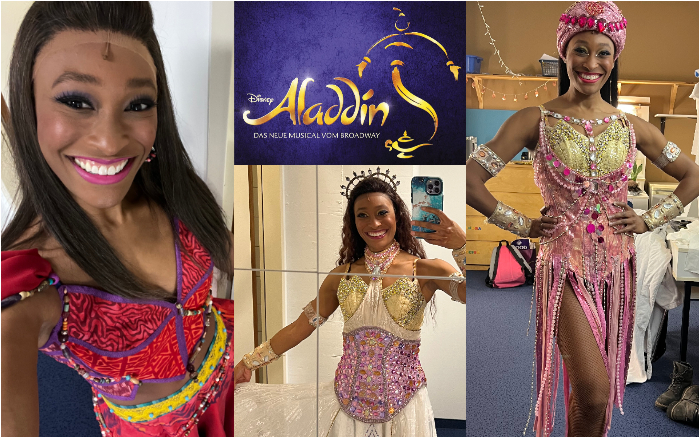 It was quite the process, but we are pleased to announce that A4D’s Krystina Burton landed her dream job in ‘Aladdin’ in Germany! She opened this week and shares her story. This is one determined dancer! Read on…

‘To be honest, I’ve been chasing Aladdin since before it made its debut on Broadway in 2014. I was just finishing up my contract with The WOW Show in Israel when I saw the Aladdin casting notice pop up. I just knew it was going to be the show for me! That particular notice was for a call in Chicago, so before I even left Israel,

I booked my flight for the audition ... and it went better than I could have imagined. I made it all the way to the end; jazz, tap, and singing ... but no dice. Regardless, I continued to go in every time they held auditions in New York.

Eventually they announced a tour in 2017 and I was invited to audition. I thought to myself, ‘This is it!’ Again, I made it to finals but it ended there. After that close call, I continued to be invited to calls but still did not book. But I did notice that each time I went in, I seemed to be building a rapport with the casting team, and if nothing else, they would know that I was both consistent and persistent.

Fast forward to the pandemic. I started to get creative and branch out with my audition searches and that’s when I found Stage Entertainment (they specialize in talent for shows in Europe). As I scrolled through their Instagram, I found a casting notice for Aladdin in Germany.

While New York was still shut down, Germany planned to hold in-person auditions within the coming month. With nothing to lose, I submitted and received an invite to the in-person call. While a little tentative with the state of Covid, I just knew this show was calling my name. I headed to Hamburg to audition mid-May and received my contract offer a week later!

Needless to say I was ecstatic! My dream was finally coming true. Something I had been chasing for so long had finally come to fruition. It may not have happened when or where I thought, but I am here in Germany right now! All this time, I knew and believed so strongly that one day this show would be mine.

If I could offer any advice it would be perseverance! I was so close so many times but seemed to always come up short and while it was frustrating and disappointing, I wasn’t deterred from coming back again and again and again.

Stay the course! It’s true, what is meant for you will not pass you but you also have to keep doing your part and showing up so you can meet your blessing when and where it appears.’

Thank you Krystina for sharing your incredible story of determination. Look at you now! Have fun!