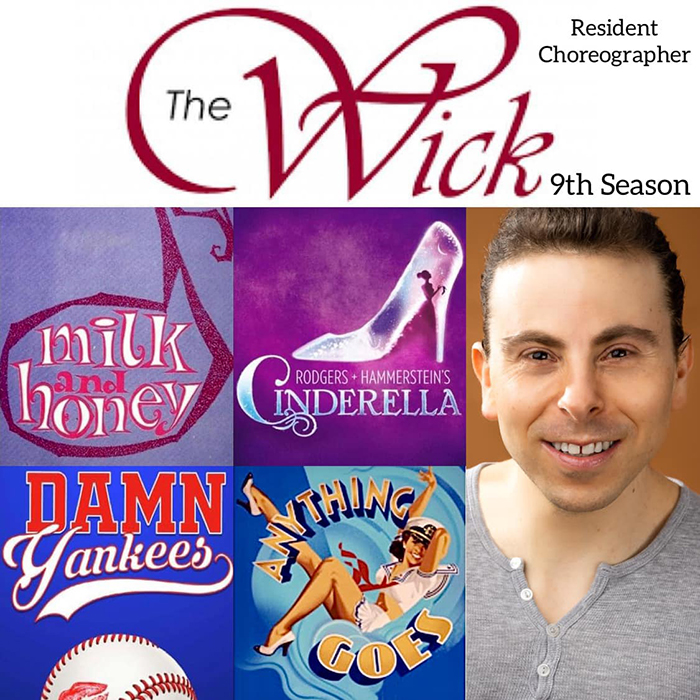 We recently featured A4D member Oren Korenblum for his booking as a dancer in ‘Broadway By The Year’. That was a dream come true and now he’s announced an incredible new choreography booking.

Here’s Oren’s announcement in his own words:

‘Sometimes you don’t even dream what the universe can bring. I kept this info for a while but now I’m so excited to share that on September 28, I started my new job as a resident choreographer for the 9th Season at The Wick Theatre & Museum Club in Boca Raton, Florida.

It’s a true gift. I don’t take anything for granted.’

Congratulations to Oren for all his hard work during the industry shutdown that paved the way for these recent bookings.

MORE ON THE WICK THEATER & MUSEUM >

Oren teaches Advanced/Beginner Tap on Thursdays at 2:15pm at at Steps on Broadway.

When the pandemic hit, my sister Lenaya Faustman and I used the downtime to create our own choreography company, LTCreatives. We shared our work with connections we made as performers over the years. Premium Group became interested and wanted to keep us in mind for future opportunities.

Fast forward to 2022. We received a message that Premium Group needed choreographers for performances at HIYA International Airport for the FIFA World Cup. And they wanted us!

It all happened very quickly, as they do in Qatar. My sister couldn’t join me on this journey because of a ship contract. My best friend Sophia Bebyck and performer/choreographer stepped in to take her place. We were on a tight schedule had to start creating, casting, and choreographing at a distance until I could arrive. We used video calls, WhatsApp messages, and mood boards to begin creating.

Our first performance was the countdown to the World Cup, 100 Days to Go until FIFA.

We will be creating shows once a month to be performed at the Airport. Once the World Cup officially kicks off in November, we’ll have performances twice a day for passengers arriving from all around the world to embrace the soccer spirit. Our contract will run until mid December, choreographing and creating all the shows as well as embracing the World Cup in Qatar.

Throughout my years as a dancer, training, performing, auditioning, and travelling, I have learned, it’s so important to keep connections with industry professionals. It sometimes comes down to who you know. Work hard and leave a memorable mark. Don’t be afraid to put yourself out there, showcase what you’re creating, so if an opportunity comes around, they remember you, and think of you for these moments.
Congratulations Taryn. This is exciting and we look forward to hearing more from you. And we had one last question for her… How has Answers4dancers helped in your career?

I joined A4D back when I was 19. It’s a beautiful place to network and join forces with fellow performers. It’s great to know there are other dancers out there who are feeling the same way you do… after all, it’s not always rainbows and butterflies. A4D is a great way to learn and gain more insight into this crazy career we all love!

Grover Dale: An Interview With the Dance Legend

An Unbelievable Night on Broadway